What’s in a name?

There are only 330 critically endangered North Atlantic right whales left in the world. They can be found in the busy fishing and shipping waters off the East Coast of North America. Most right whales have scars from traumatic human interactions – a legacy that often follows them by their name.

These whales are struck by ships or caught in fishing gear, which, if they survive, can leave lasting and painful damage that they carry for the rest of their lives.

Entanglements in fishing ropes can cause slow and painful deaths. While some whales starve, others drown. If they survive, the ropes can cause abrasive wounds and leave scarring patterns all over a whale’s head, body and tail. Gully, for example, is a young female right whale born in 2016 who suffered serious entanglement early on in her short life. She was named after a deep scar on her head. Batman, Gemini, Tusk and Boomerang are also named after scarring likely caused by entanglement in fishing gear.

Vessel strikes can be fatal. If a whale is lucky enough to survive, it is often left with devastating wounds from propellor blades. Trellis and Accordion are both named after scars from these injuries. Wolverine is another – named for three deep propellor scars across his back that were likened to the claws of the famous comic character. Tragically, Wolverine was found dead in the Gulf of St. Lawrence, in 2019, at just nine years old.

In Oceana Canada’s latest report, Protecting Right Whales from Ship Strikes, the results of a two-year investigation revealed that many vessels are not complying with a voluntary speed restriction put in place to protect these endangered whales. In fact, over the two years, 68 per cent of vessels travelled at speeds above the voluntary 10-knot limit in the Cabot Strait and 43 per cent travelled at speeds faster than 12 knots. We know that when vessels travel at slower speeds, whales have a greater chance of surviving a ship strike. 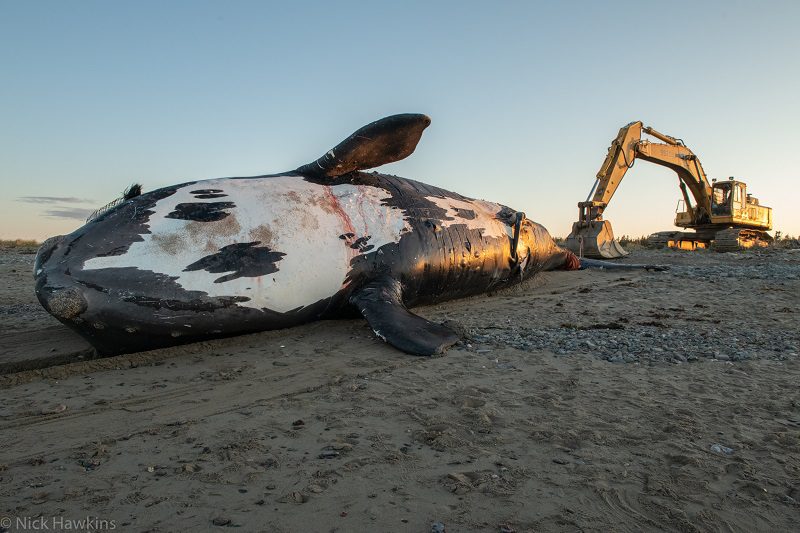 So few North Atlantic right whales remain, and many of them share similar stories. Stories of injuries inflicted upon them by human interaction and a legacy of that trauma left in the form of a name. But wouldn’t it be nice to foster a world where all of these critically endangered whales were scar free and were named for their natural markings, personality or family history, instead of their trauma?

As it currently stands, every year protection measures are put in place at the discretion of the Minister of Fisheries and Oceans Canada and the Minister of Transport Canada. But protecting North Atlantic right whales is a long-term challenge that requires a permanent solution. The current approach of treating their protection as an annual emergency needs to change.

Tell the government to take action and put in place permanent measures to protect these iconic whales, before it’s too late. Add your voice >>