It’s been five years since Oceana Canada published its first Fishery Audit — an annual assessment of the health of Canada’s wild fisheries and how well Fisheries and Oceans Canada (DFO) is managing them.

Today, there are fewer healthy fisheries than there were in 2017 – 30.4 per cent in 2021, compared to 34.5 in 2017. On top of that, nearly one in five stocks are critically depleted — and more than 80 per cent of them lack rebuilding plans, which outline how and when a population will be brought back to healthy levels.

In the past five years, we’ve seen some progress: greater transparency, substantial new investments in science, new national standards for monitoring and a modernized Fisheries Act that makes rebuilding depleted fisheries the law. However, the biggest problem lies in implementing the policies that DFO has already put in place. Modernized laws, political commitments and much-needed investments are only as good as the government’s ability to successfully implement them, which, in the case of Canadian fisheries management, has demonstrably fallen short over the past half-decade.

Year after year, Oceana Canada’s assessments reveal that DFO is failing to significantly improve how fisheries are managed in Canada. As a result, we haven’t seen measurable improvements where it counts: on the water.

Changing the trajectory of the health of Canada’s wild fish populations is more urgent than ever. Fisheries today face increasing pressure from climate change, pollution, habitat destruction and overfishing.

Canada’s seafood feeds millions of people here and around the world. It’s fundamental to the culture and livelihoods of coastal communities and Indigenous Peoples. And it’s the largest contributor to the country’s massive marine sector GDP.

It is not too late, and we have the tools: global best practices to restore abundance to our oceans already exist and we’ve seen examples of how strong action on fisheries rebuilding results in real change.

Since 2000, the U.S. government has rebuilt a reported 47 depleted stocks,[i] thanks to strong rebuilding requirements in the Magnuson-Stevens Act. Twenty-six of them were rebuilt between 2010–2020 with an estimated combined landed value of approximately $240 million CAD in 2020.[ii] 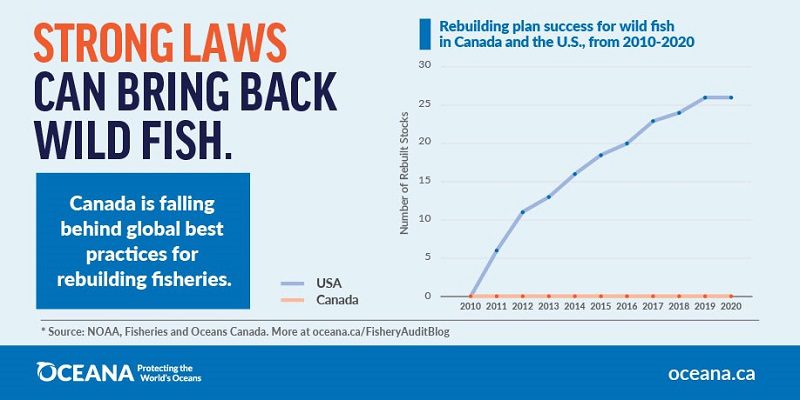 The key steps are clear: Implement strong Fisheries Act regulations to set the foundation for returning Canada’s fish stocks to abundance. Ensure decisions are based on the best available science. Incorporate Indigenous evidence, practice and knowledge systems. Work aggressively to restore forage fish like capelin, herring and mackerel. And track and report on how many fish are harvested by all sources of fishing, including bait and recreational fisheries.

Rebuilding wild fish populations can — and must — be a priority for the newly elected government. For our marine ecosystems. For Canadians. For reconciliation. For the future of our ocean-based economy. And for our ability to help feed the world’s growing population.

You can read the full Fishery Audit and Oceana Canada’s recommendations for the year ahead by visiting FisheryAudit.ca

[i] https://www.fisheries.noaa.gov/national/sustainable-fisheries/status-stocks-2020
[ii] Approximate value of 2020 reported landings (USD) of each rebuilt U.S. population, based on species and National Marine Fisheries Service regions as reported by the National Oceanic and Atmospheric Administration (NOAA). Available at https://www.fisheries.noaa.gov/foss/f?p=215:200:16006322214907:Mail:NO. Value is approximate as U.S. Fishery Council areas used in the NOAA landed value reporting tool do not always align with stock areas. Also, note Pacific salmon stocks declared rebuilt in 2011-13 are excluded as most have been declared overfished again and included in new rebuilding plans.